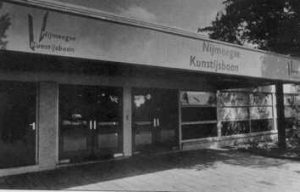 In 1968 the City Council in Nijmegen decided that Nijmegen should have an ice rink. The ice rink was built in the Bellefroidstreet in the city-area called Heyendaal. The original opening of the icerink was scheduled on January 4th 1969 and was planned to be a match between the Dutch national side and a a selection team of the Canadian Army named “The Rebels”. As they discovered a fault in the pipe-system under the icefloor this game was cancelled. About a month later on February 10th 1969 a game was played between Dutch team Rotterdam and the 2nd team of Dusseldorf (Germany) which became the first game to be played in Nijmegen. This game ended in a draw (6- 6).

In December 1969 Icehockeyclub Nijmegen (NIJC) was founded by some hockey enthousiasts (Hans Janssen and Bas Nas) and they joined the Dutch Icehockey Federation that following year (March 1969). The first ever official game Nijmegen played was against the team HIJS-HOKY from The Hague on the 15th of march in 1969. Before 300 spectators Nijmegen lost that game 2-8. In that first year Nijmegen played only a couple of exhibition matches (a 4 – 2 win against Den Bosch and a draw against Geleen, 5 – 5).

In the 1969-1970 season Nijmegen entered the regular competition in the 3rd Division after having newly acquired Alex Andjelic from icehockey team Den Bosch as a playing coach. Alex Andjelic was a top player in Serbia with Partizan Belgrade and was member of the Yugoslav National team capping more than 40 international games. Andlejic would be connected to Nijmegen up to 1985. 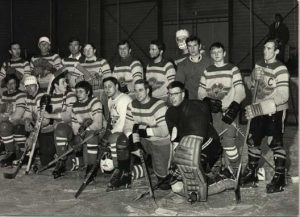 In that 3rd division Nijmegen played both Dutch as Belgian teams for the title.

In their first ever year in the 3rd Division the Nijmegen-team promoted to the 2nd Division while beating Belgian-team Brussels in the Final Play-offs. Nijmegen conquered also the Fair Play Cup that year. The first ever official goal was made by former team captain Ben Smulders in a game against Geleen on the 8th of November after 8 minutes and 20 seconds. This goal was the first of many goals scored in the history of this club.