In Nijmegen’s history only one player has been honored with his number being retired. Ben Tijnagel’s number 11 will not given to another Nijmegen player ever. On December 5th 2005, age 41, he was killed as a result of a severe car accident on the German Autobahn.

Ben Tijnagel embodied Nijmegen. Not only as a player but also as an (interim) coach and sponsor.

When Nijmegen was in need they knew that they could always count on Ben’s leadership. Both on and off the ice. He was undoubtedly the best Nijmegen born player, however as a person equally as important. More. 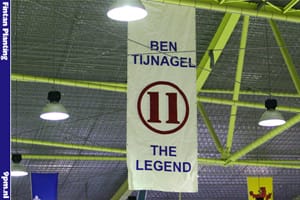